The Best Fossil with the Best Name

A genus of awesome fossil from the mid-Cambrian with an awesome name. Those worm-like creatures are about 0.5 to 3 cm long and are abundant as fossils, suggesting that they were one of the dominant species of their time.

The discoverer of those fossils gave them this name because of their "bizarre and dream-like quality". Scientists have been disputing which side of this animal is up, and which side is front. There is no obvious "head" but a bulb at an end and a "tail" at the other end. Neither of the two pairs of spine-like appendages seem to be suitable for any kind of movement. The classification is also troublesome. Scientists now believe that Hallucigenia is related to modern arthropods.

Trilobites are adorable, but Hallucigenia is just too cool!


Some reconstruction images of Hallucigenia: 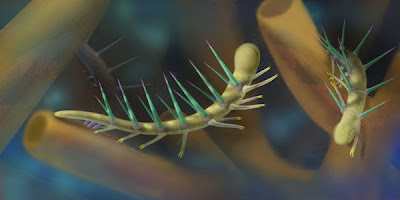