Rock Steady by the Whispers.

What have people done to their computers? LOL
Posted by Rita C at 12:06 PM No comments:

Email ThisBlogThis!Share to TwitterShare to FacebookShare to Pinterest
Labels: random stuff from somewhere else

A Little Skepticism to Modern Taxonomy

One little question about our taxonomy system has been haunting me, even when I'm eating or going to bed, since the beginning of May.

After I took the introductory entomology course, I learned that many taxonomic groups have been changed or created as technology improves. For example, the old Isoptera was placed under Blattodea as a subgroup. The same thing happened to Homoptera, which now belongs to Hemiptera. What we call lice and bark lice were proved to be a complicated polyphyletic group, as opposed to the traditional view as two distinct monophyletic groups. More and more evidence of the genetic relationships between insects was discovered by molecular biology. Biodiversity has always fascinated me, so those changes are the wonder of modern science that impressed me and imprinted in my mind.

At the time, I visited a professor to discuss my next semester's lab project. Although the professor didn't accept me, one of his sentences sparked this little skepticism in my mind. He was working on a kind of beetles that feed on dead trees. I asked him the group which the insect belonged to, he said they were newly placed in Curculionidae. "Oh, so they are a kind of weevils!" I said. The professor explained this kind of beetles have the look and ecology totally different to those of weevils; the change was made mainly based on genetics.

My, has taxonomy lost its original purpose? Taxonomy doesn't exist in Nature. It's a system, a science created by human beings to organize all the lives on Earth, and to communicate with each other conveniently. In the past, biologists used mostly morphology, ecology, behaviors, and past evidence (fossil records) to classify organisms. The beauty of taxonomy is, it doesn't only tell the history (evolution) of a particular group of organisms; when an entomologist says a species belongs to "Vespidae", another entomologist, although doesn't know the species, could immediately picture the approximate shape, ecology, and behavior of the insect. It's a common and important language spoken by biologists. However, the Nature is always more complex than we thought. Insects are very good examples because of their visibility and incredible evolution and diversity. Species that look radically different could be closely related, while the look-alikes are often the works of convergent evolution.

Classifying organisms according to their genetics sounds the most legitimate. I've been obsessed with taxonomy, believing that it could help us humans to manage the list of species we have, and discover more knowledge of life. This skepticism made me sad. We could no longer expect the same taxonomic group to look alike, or even have similar behaviors. Has morphology died? Does it mean we can't communicate conveniently unless we are experts of the group? Does it mean modern taxonomy has lost its original point - the desire of humans to organize the world by grouping things of similarity together? Are taxonomic groups today nothing but millions of ordered "A, T, G, and C", making no sense to most people except computers and enthusiastic molecular biologists?
Posted by Rita C at 7:14 AM No comments:

Email ThisBlogThis!Share to TwitterShare to FacebookShare to Pinterest
Labels: biology, entomology, evolution, some notes that might be important

I surprisingly discovered a lace bug being carried by our bag from Cheng Qing Rehabilitation Hospital into our car - the first time I saw a lace bug alive. Excitedly, I showed my parents and sister the bug. Because lace bugs are very tiny and delicate creatures, their beauty cannot be fully seen without being magnified. My sister said she wouldn't even think it was an insect if it didn't move.

Lace bugs belong to Tingidae, a very small order of Hemiptera. Their unique appearances look like some ancient European nobility dressed in many layers of lace. I didn't have the "machine gun" kind of camera to capture the one I met (it was less than 4 mm), so here're some photos I found through Google. 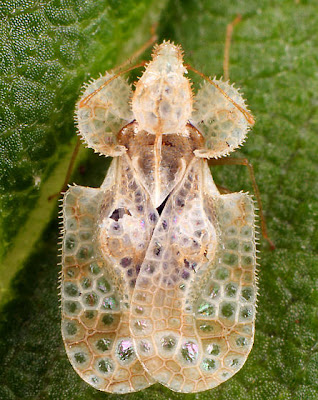