My previous dot blots were failures. If there's something wrong with our method of detecting the JHBP, I can't advance to the extraction process. I tested with hemolymph samples and the results was a weird "negative staining" - the pigment stained the paper, but where the protein is supposed to be remained white. Prof. Goodman said he's never met this problem in his lab. There could be problems with our antibodies, techniques, material, or something else but we didn't know.

Goodman decided that the antibodies in the refrigerator might be expired. We went to the basement on Tuesday to the huge cold room where stores all of his antibodies and other precious stuff. I watched him digging boxes of tubes out of the negative 80 degree Celsius freezer since he hasn't touched them for a long time. Finally he handed me a 50 mL Falcon tube - which reads "MAB #6, 1. 28. 99" - and told me that was the monoclonal mouse anti-JHBP antibody he obtained in 1999.

The process of producing the antibody was expensive and tedious. JHBP was first injected into a mouse and the antibody was produced at peak after a month and half. The mouse's spleen cell was taken out and cultured - a single cell in each well - with spleen cells made cancer. The cells will hybridize successfully in only a few of those cultures, starting to divide indefinitely and producing the primary antibody. This hybrid cancer cell then was injected into the abdominal cavity of another mouse. The poor mouse grew larger and larger with the tumors until it couldn't walk anymore. Its body fluid, a rich source of the antibody, was dripped and collected. Prof. Goodman made a contract with a company that produced this antibody, and he must hand in large quantity of the antigen - the JHBP - in return. However, over a decade he hasn't figured out how to do it.

I was told to separate the antibody into aliquots, because antibody is best not be refrozen. Since Goodman shared his valuable backlog with me, I treated it as deliberately as possible. On the same day, I pipetted the antibody into 108 centrifuge tubes, 100 micro-liter each, and labeled and stored them in the freezer.

We were suspecting that the problem with the dot blot was the PVDF paper, which didn't seem to absorb the samples, and the dot blot apparatus. Prof. Goodman let me use nitrocellulose paper and just a vacuum instead on Thursday. He killed another Manduca caterpillar for its hemolymph. I prepared the samples, straight hemolymph and 1/10 concentration, and tested them with different concentrations of the primary and secondary antibody. 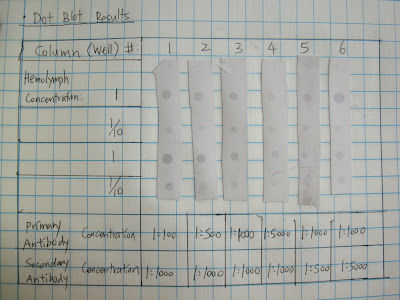 It was a success! Not only we found that nitrocellulose paper absorbs the samples much more efficiently, we also determined the optimal concentrations for each antibody, the ones that stain the samples the darkest while give the lightest background color. It looked like 1:1000 primary antibody and 1:5000 secondary antibody (column #6) is the best combination for detecting JHBP.

A note on the strength of the signal is, I put 2 micro-liter hemolymph on each dot. Goodman said the concentration of JHBP in Manduca hemolymph is 1.4 nano-gram/1 micro-liter. The purple dot we saw there indicated the presence of 2.8 nano-gram of JHBP.

We became much more upbeat, because the problem wasn't the antibodies, which would be a much bigger trouble. Prof. Goodman said this experiment could be my introductory research project. I felt that he looked at me with more appreciation. I'm gradually getting out of the clumsy novice phase. Although it's just start for me, Goodman is also finding that I'm a diligent and capable person - someone he'd like to be in his lab and good for doing science.

P.S.  I asked, "So it means every time I do a Western blot or dot blot, we have to kill a caterpillar?" "That's what they're there for," said Goodman, "We sacrificed trillions of bacteria in the experiments. You can just hear them screaming in the back room 'NO NO NO not me!'" I said, "They're genetically modified to produce a protein that they hate. They probably want to die." "They want to commit bacteriocide!"
Posted by Rita C at 12:31 PM