Just some parts from my 5-page-long art history final paper. Taking the components of the painting apart, I felt like studying the anatomy of an organism. I should have started it a few weeks ago, however finished it in the last day. Whether it's good writing or junk, it's done now! Consider how much time I put in, I'm satisfied. Hope prof. MC will like it. 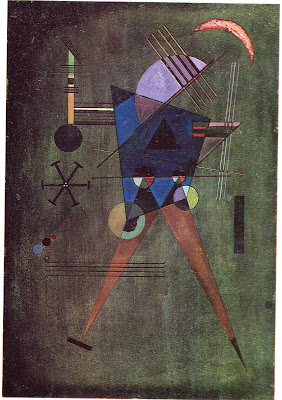 Wassily Kandinsky, Black Triangle, 1925
Source: Paul Overy, Kandinsky: The Language of the Eye
New York, N.Y., Praeger Publishers, Inc., 1969, p. 91
Writer: me
"The painting is diagonally organized."
"When we look closer, we will find there is actually a wide range of colors. Most shapes are not monochromatic ... the variety of colors is underlain."
"The colors being emphasized are blue and red ... the red colors create an illusion that the two triangles and the crescent are dynamic."
"In his On the Spiritual in Art, Kandinsky wrote that colors have intrinsic properties that determine their relationship to the spectators. Warm colors tend to radiate and move toward the viewers, and cold colors tend to condense toward the center and move away horizontally. The deepening of colors also increases their depth, moving them toward the background."
"The lines across the canvas serve as vectors, reinforcing the illusive motion of the figures."
"Kandinsky generally adopted a light yet saturated palette ... In contrast, most colors in Black Triangle are impressive and deep ... What unites the color use in Black Triangle to Kandinsky’s oeuvre are the balance and echo of colors and the emphasis on the colors’ relationship to the spectators."
"The rigid shapes look more mechanical than biomorphic; and surprisingly, the painting’s graphic quality is reminiscent of synthetic cubism."
"In Black Triangle, we hardly see an external reference and there is no real perspective ... Although there is a foreground and a background in Black Triangle, the relative position between the figures is confusing."
"... Kandinsky, for whom colors and composition are equally important ... we can easily separate Black Triangle from cubist paintings."
"Instead of acting as spectator and a neutralizing agent, the background interacts with the subject and cooperates in creation of the overall atmosphere."
"The geometric composition, heavily reduced forms, and the use of primary colors in Black Triangle are features of elementarization."
"Black Triangle may have a hint of surrealism, ... The name of the painting is intriguing. It suggests that the main subject is a rather inconspicuous and small shape in the heart of the blue quadrilateral. This makes us wonder whether the name is referring to a larger scale ..."
"We could argue that the subject of this painting creates an allusion to the human body ... Kandinsky’s painting is not symbolic, since there is not external reference, but it’s possible to say it is the portrait of the painter’s psychological state during the production of the painting ... There could be some influences, but we cannot categorize Kandinsky as a surrealist."
Posted by Rita C at 1:37 AM