I'm going to write it down before I forget.

The Infected Mushroom concert was my third concert in Madison. I was more prepared, more experienced about what was about to come, what kind of clothes I should wear, how would the audience act, etc., like a psychedelic user ready to take the second dose.

It took place in Majestic Theatre. It's such a good place! Small and not crowded. you can get very close to the performers. When I was recording Pink Nightmares, I was like 3 meters away from both Amit and Erez!

"It was the best party ever!" is the only thing I could say about the concert. I wanted to go to a psytrance party so bad, and then here came the most famous psytrance band, Infected Mushroom! I felt so lucky.

I still can't believe Erez was so nice! He's really friendly and respects his fans. After the performance, he came down the stage to shake our hands and talked to us. Look! It's Erez! He was the world's no. 9 DJ at some point!

I took 3 photos with him. The first photo was blurred, so I asked him if I could take the second one. He agreed.

I even got his signature! He gave signatures, hand shakes, and hugs to whoever wanted them. 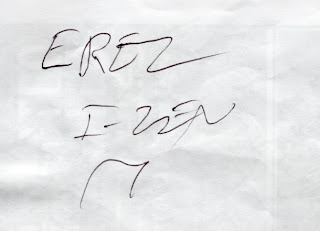 I mentioned Astrix to Erez, because I know Infected Mushroom and Astrix are associated.
When I heard him talking, I believed the accent in IM's vocal parts is real .... they speak with very distinct Israeli accent.

Ohhhh, I'll never forget my first IM concert, my first psytrance party!
What should I do with that piece of paper with Erez's signature?
Posted by Rita C at 12:01 AM