I really shouldn't be drawing because I had much to do, but I did.
Little was done in this afternoon. I guess I'm just sick of studying.
I felt like drawing this although I don't even know if it's needed ...

It's the arms of an ancient family with good tradition.
This is probably passed down from Medieval or so. 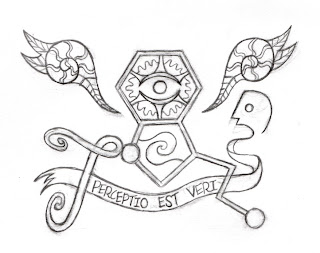 Would the non-psychedelic members have objection?
I know it's lame. The shapes should probably be put more tightly together. If I've got better ideas I might change some parts and the words later.

P. S. The word "veritas" might be more appropriate instead of "veri".
Posted by Rita C at 5:44 PM