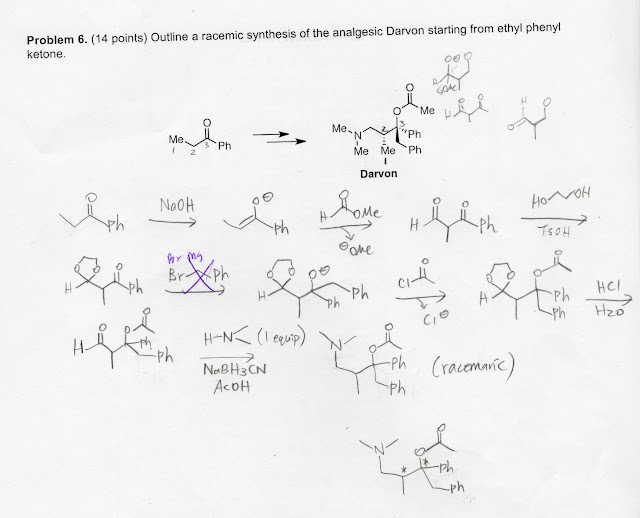 This is from my 4th chemistry midterm. It was the first synthesis problem I ever successfully answered on an exam! Except I got one point deduced for a careless mistake of writing a bromide instead of a Grignard reagent. I ... was so happy! I got 84% on this exam, which was much higher than the average 54%. Now I'm preparing for the final. I hope I could perform as well on final. We've learned about 150 chemical reactions this semester. Hard to believe right?

I read someone's webpage about Nikola Tesla (the inventor of alternating current, modern electricity system, and many other electronic-related stuff). The person was basically explaining how Tesla was the king of inventors and geeks and Edison was a dickhead (the insults are a thousand times worse on the webpage; the lack of objectivity made me doubt the "facts"). Seems like Tesla had investigated and invented more things than Edison, but he just frequently forgot to write them down or patent them. If the "facts" on the webpage are true, what a shame it is that all the books and textbooks I've read told me that Edison was one of the greatest scientists/inventors and I've only heard about Tesla's name a few months ago! (The webpage said Edison did a lot of bad things in the rivalry with Tesla.) Edison enjoyed the fame and profits brought by his inventions, but Tesla was never married and eventually broke and died alone. (That's sad, he was a handsome guy too ... but consider his exceptional passion for lab works and mental illness, it was probably better that he was single.) There seem to be a lot of underrated scientists in history, while some others became world-famous not entirely due to their works ... I guess now I understand why Tesla won the majority of people's support on Facebook in a humorous comic battling with Edison.

I don't know how much those were true, but just look at Tesla manipulating electricity and lightening in his hands and lab, and claiming that he had the design of devices that could charge a building from lightening (so we don't need wires) and death rays that could kill an army 200 miles away ... OMG so badass!

Btw, the webpage is here: http://theoatmeal.com/comics/tesla
Posted by Rita C at 3:38 AM