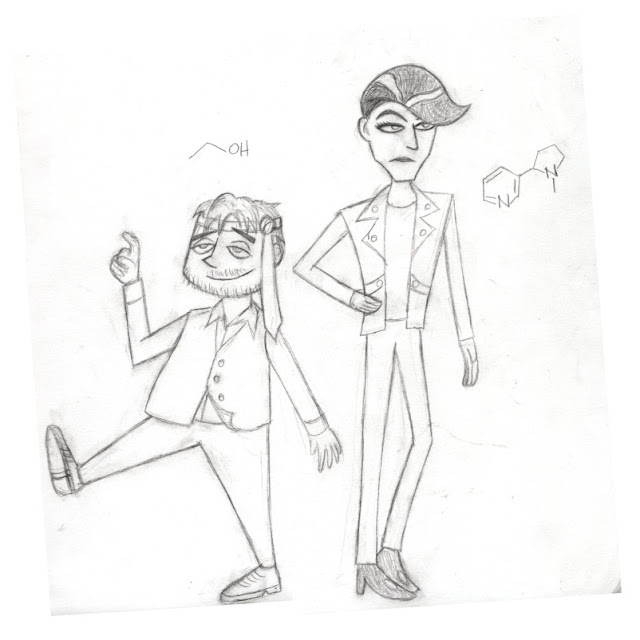 If it doesn't seem strange, they're both going to be some kind of East European. I bet each of them is probably over a hundred years old. =P

Ethan: I drew him upon the request of someone on dA. Ethan is always drunk, but still, he can do tons of things (includes driving an ethanol-fueled car). He puts a lot of cologne on to cover his alcoholic smell. He's flammable and afraid of fire; however when the temperature increases slightly, he can vaporize and fly. At room temperature, Ethan is a liquid so he can squeeze into any shape. Catrina suggested me to put a stereotypical tie around his head. Does he look good with it?

Nic: I'm not totally satisfied with what ze's wearing. Any suggestion? Nic puts too much hair oil and make-up on and oil on the shoes (that's reflection on zir hair I can't draw it). Even though a lot of people don't consider zir a drug, ze is an incredibly famous and prevalent stimulant. Ethan is zir best friend and they hang out in bars all the time. Nic still goes for "he" usually because most other molecules don't know how to use "ze" (only Ethan knows). Ze uses the name Nico when ze puts zirself in a dress. Should I portray Nic with a cigarette? The molecule has a methyl group that looks kind of like a cigarette.

Here's an article talking about why Ethan and Nic are BFF's:
Ethyl alcohol makes nicotine more enjoyable
Posted by Rita C at 3:18 AM